An operator must ensure that the Retirement Village promotes a culture that values and encourages residents to raise concerns and supports the effective resolution of any complaint.

An operator must not discourage a resident or a person acting on behalf of a resident (including members of the Residents Committee of the retirement village) from making a complaint or pursuing an internal dispute.

The following is not allowed under the Retirement Villages Amendment (Rules of Conduct for Operators) Regulation 2019 and is not condoned by Oceangrove Management:

To deal with any internal complaints or disputes, the Village has the following process.

Residents are encouraged to contact the Resident Committee.  If this is not successful or a resident prefers to raise the issue with Management, the Resident should raise the dispute with the Village Manager.

Resolution of the dispute will depend upon the nature of the individual dispute.

If there is still no resolution the dispute can be escalated to the Village Operators, Sarah Sutherland and Grant Easterby. 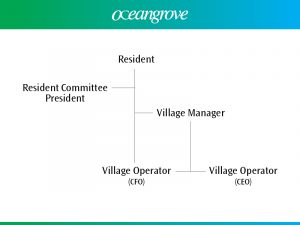 Should the Village’s internal process fail the residents can seek advice through NSW Fair Trading or the Consumer and Commercial Division of NCAT.

All measures are taken to ensure the privacy of residents involved.

Copies of this policy are available from the concierge.